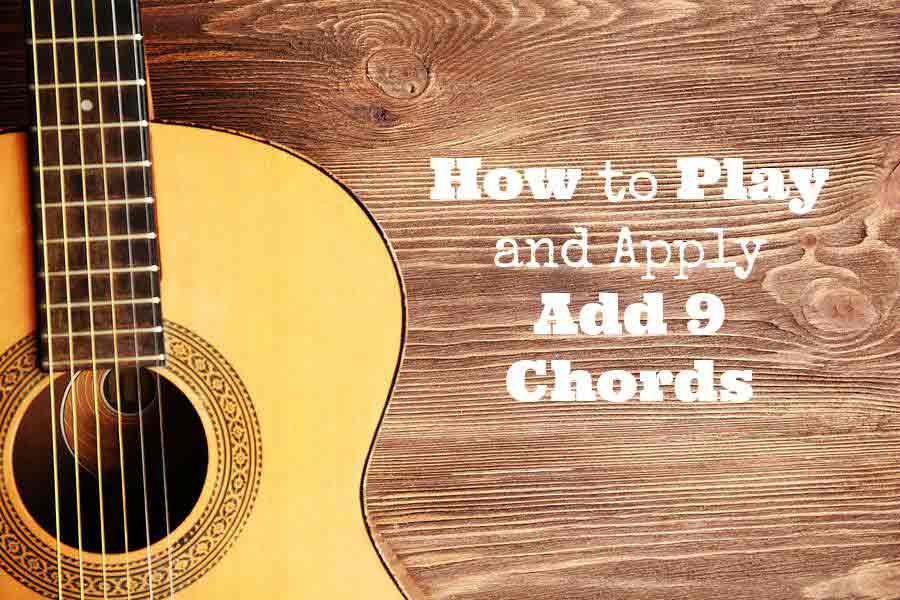 Chords like sus2, sus4, maj6, maj7 and add9 can all be used to spice up your playing and create more interesting sounds.

The add9 chord is a big favorite in pop and acoustic rock music.

Application
The add9 chord is traditionally used for the I and IV chord but can be applied everywhere depending on the song and chord progression. The best way to apply a chord embellishment is to use your ears.

Here are some of the most common used Add9 chords: (Practice and memorize each chord!)

Good Riddance by Greenday
Intro + start of the verse:
G – G – Cadd9 – D
Another turning point a fork stuck in the road…

Wonderwall by Oasis
Prechorus:
Cadd9 – Dsus4 – Em7
And all the roads we have to walk are winding…

Add9 – Maj9- Dom9
While the add9 chord and it’s analysis seems clear, there’s often some confusion between the Add9 chord and some other types of ninth chords. There are three ninth chords that a lot of guitar players tend to mix up: Add9, Maj9 and Dom9. Let’s clear this up:

The similarities are that all three 9th-chords contain a major triad (1 3 5) and the 9th. The difference is the 7th or absence of the 7th. Look at the chord formulas below.

Assignments:
– Practice and memorize all add9 chords above.
– Learn songs that include add9 chords.
– Practice the moveable chord shape in different keys.
– Incorporate add9 chords as embellishments into your own favorite songs.