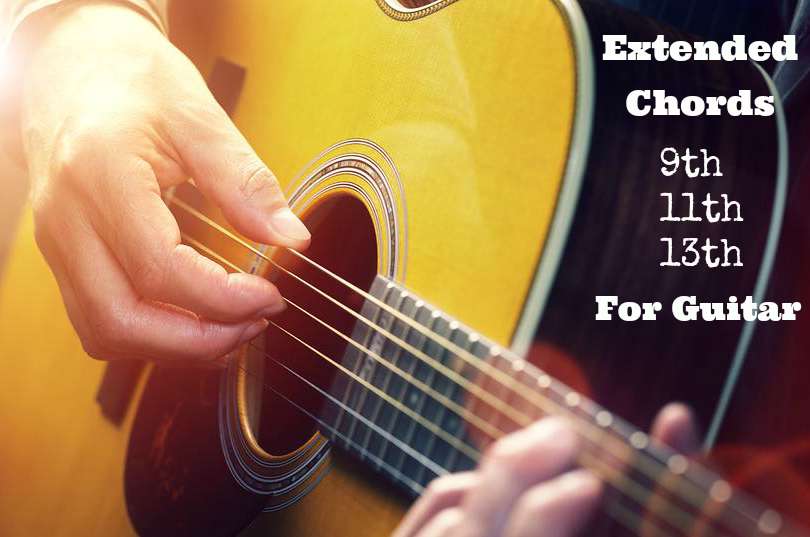 Extended chords are usually used in jazz music, but also in other styles like pop, blues and latin music to spice up chord progressions and add some nice flavor to the chords.

When I first learned the theory behind extended chords, it opened up a whole new world for me. All these mysterious chord names made finally sense.

I would use the chords for my own material, incorporate them into some of my favorite guitar songs and started learning some wicked jazz tunes.

Once you play around, experiment and incorporate these chords into your playing it will make guitar playing really fun and colorful.

If you’re new to chord construction then first check out How to Use Chord Formulas and Their Benefits and How to Play The Most Common Types of 7th Chords. These posts will give you the basic chord theory you need.

Triads and 7th Chords
Extended chords are the 9th, 11th and 13th chords.

To understand the chord structure of extended chords we must first know the major and minor triad and three types of seventh chords. We use the “C” chord as an example to show the chord names.

As you can see chords are based on third intervals (1-3-5-7). To create the extended chord, we need to stack up another third interval.

Notes: Extended chords have many notes. The thing is you have to deal with only six strings and practical chord fingerings so here and there you are allowed to omit some of the notes. In this case you can leave out the 5th because it’s the least important note. It doesn’t effect the overal sound of the extended chord.

Extended chords are extensions of the 7th chord, therefor the (b)7th is always present in the extended chord. Also the 9th seems here pretty important since it’s a 9th chord.

Note: The major 3rd and the 4th (4th is the same as 11th) clash and create dissonance (which doesn’t sound very pretty), therefor the third is often omitted in the C11 and Cmaj11 chord. Originally this would change the name of the chords. C11 becomes C9sus4. Cmaj11 becomes Cmaj9sus4. Still the chords are often notated as an 11th chord.

An extended chord doesn’t change the quality of the chord it only adds more flavor to the overal sound.

Tip: All the extended chords shown above are closed chords and can be played in every key. The 1 is the root of the chord and determines the name of the chord. In the examples above the root note is “C”. Move any of the chords up a half step and “C” becomes “C#”, move up another half step and it becomes “D” and so on.

2 – Experiment and substitute a dominant 9th chord for a dom7th chord when you play a song.