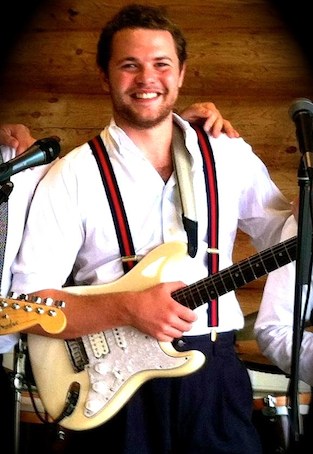 A great example of how get the most out of your pentatonic scales. Learn and reap the benefits!

Klaus has written extensively on this as well as the CAGED system, so I’ll let you read through some of his postings for more info on playing these scales.

Today we will look at creating the Mixolydian scale by combining some major pentatonic with its parallel minor pentatonic.

What the heck is Mixolydian?

Mixolydian is a mode, and modes are really just types of scales, much like major and minor (in fact, major is called the Ionian mode and minor is called Aeolian). Perhaps the simplest way to understand modes is to look at a major scale. Let’s look at C major, where our notes are C-D-E-F-G-A-B-C.

Playing a major scale (in this case C major) but not starting or ending on C, creates our different modes. For example, the second mode, called Dorian (in this case D Dorian) would look like this: D-E-F-G-A-B-C. Similarly, the fifth mode, called Mixolydian, would have G-A-B-C-D-E-F as its notes. Notice that each of these modes consist of the same seven notes! We are just starting and ending in different places. These are modes.

Playing Mixolydian on the Guitar

If we want to improvise using the Mixolydian scale, let’s first keep in mind that we are treating it as a type of major scale, and the major pentatonic always works over “major stuff.”

Interestingly, if we combine the G major pentatonic with the G minor pentatonic scale we will have all of the notes needed for Mixolydian—plus one more, but don’t worry, it sounds good too. Take a look:

You’ll notice if we combine the two pentatonic scales, we are left with the following notes:
G-A-(Bb)-B-C-D-E-F.

As you can see, combining the G major and G minor pentatonic gives us all we need to play Mixolydian.

Achieving the Mixolydian sound can be as simple as playing the G major pentatonic over the 12 bar blues and then every so often switching to G minor pentatonic. If you are familiar with the CAGED system, this should be quite simple.

Once you become familiar with switching in between the two pentatonic scales, you can begin to combine them (i.e. play a few notes from the major pentatonic followed by a few notes from the minor pentatonic) to further the bluesy, Mixolydian feel. Try this first over the blues in G, and see what you come up with! Of course, this can be applied to blues and dominant seventh chord progressions in any key as well.

That’s all for now—rock on!