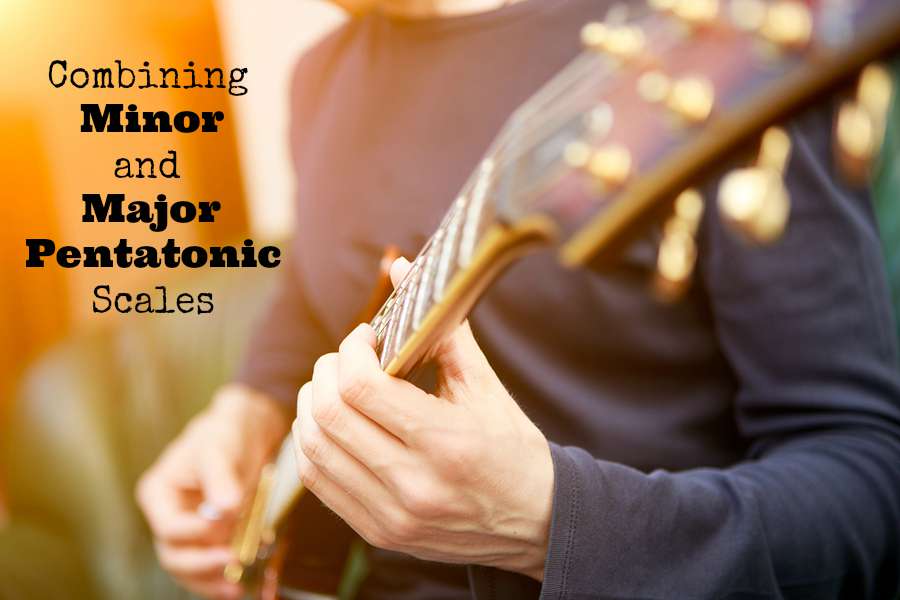 The minor pentatonic is the most important scale in blues and rock music. It’s an awesome scale and sounds great, no doubt about it. There are a million ways to express your emotions through the minor pentatonic and use it for your soloing.

Suddenly you have the ability to produce the same kind of sounds and licks you hear in the solos of Eric Clapton, B.B. King and Stevie Ray Vaughan.

Combining the notes will give you a wide selection of flavors to choose from and to play around with. You will keep attracting the listeners attention with all these extra lovely notes that will make your soloing a lot more interesting.

So how do you approach this? Let’s take a closer look.

Learn each scale thoroughly. Visualize and memorize the patterns on the neck for each scale while practicing.

Now let’s combine the notes of the minor pentatonic and major pentatonic scale and create some soloing ideas.

The two licks below use notes of both minor and major pentatonic scales. You could play these licks over a I-IV-V blues progression where A7 is the I chord, D7 = IV chord and E7 = V chord.

We’re going to play lick #2 over the IV chord (D7). Try to add some chord tones to your soloing.

In the example below the 4th fret on the D-string is an F# note, the major third of D7 chord, which sounds really good to the ear. Why? Because the note is part of the D7 chord.

The 5th fret on the G-string is a C note which is the flatted seventh of the D7 chord.

Lick #2 (played over the IV chord)

Tip: Listen to guitar players like Eric Clapton and B.B. King. You can learn a lot from transcribing their solos.

Now it’s your time! Experiment, create and make it up on the spot over a blues backing track.

It’s important to use your ears at all times. With practice you will learn what sounds good and you will come up with some great combinations.

Have a good one!