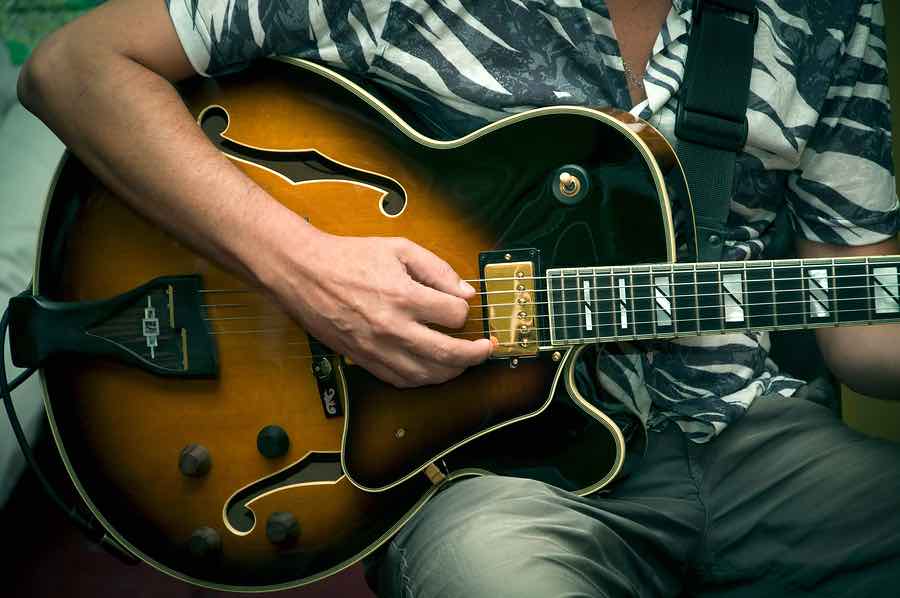 So why do you want to use the mixolydian scale for blues?

Well, not that there’s anything wrong with the pentatonic scale, on the contrary, the pentatonic / blues scale is the most essential scale for blues music.

But if you want to take it a little further and jazz it up with some nice fresh sounding notes to expand your improvisation possibilities then the mixolydian scale is a great addition.

If you already know how to play a major scale you only have to lower the 7th degree by a half step and there’s your mixolydian scale.

Because the mixolydian scale contains a major 3rd and flat7 (b7) it’s perfectly fit to play over a dom7 chord. And as you might know, the dom7 chord is the main ingredient for blues music.

Now you know how the mixolydian scale is build up, you want to know how to combine mixolydian and pentatonic into your improvisation.

You can see that the mixolydian scale contains an extra major second, major third and major sixth which will lead to some interesting flavor when used in combination with the pentatonic scale.

Note that it takes quite a bit of practice to use the two scales and make it sound as a whole and not as if you’re playing one scale and then the other. The trick is to take bits and pieces of the mixolydian scale, create small melodic phrases with just a few notes and sneak it into the pentatonic scale to make it sound natural, coherent and satisfying to the ear.

But before you can do that you first need to practice the mixolydian scale thoroughly.

Scales over chords
While you can play the A pentatonic scale easily over a 1-4-5 blues progression (A7-D7-E7), if you want to play mixolydian you need to change the scale along with the chord. So when you move to a D7 chord you also need to play D mixolydian. Move to an E7 chord you play E mixolydian.

To make this somewhat easier and learn to combine these two scales it’s a good idea to start practicing over an A7 chord vamp (a static one-chord progression).

Practice
Although you can play the mixolydian scale all over the neck (like all scales) let’s focus on the scale shape that fits best with the most used pentatonic scale shape (see first example below).

Let’s get into some effective exercises and tips that will really help you learn the mixolydian scale inside out and get you ready for improvisation.

MIXOLYDIAN SCALE IN THE KEY OF A
First practice the Mixolydian scale according to the finger position indicated on the note staff next to the notes. 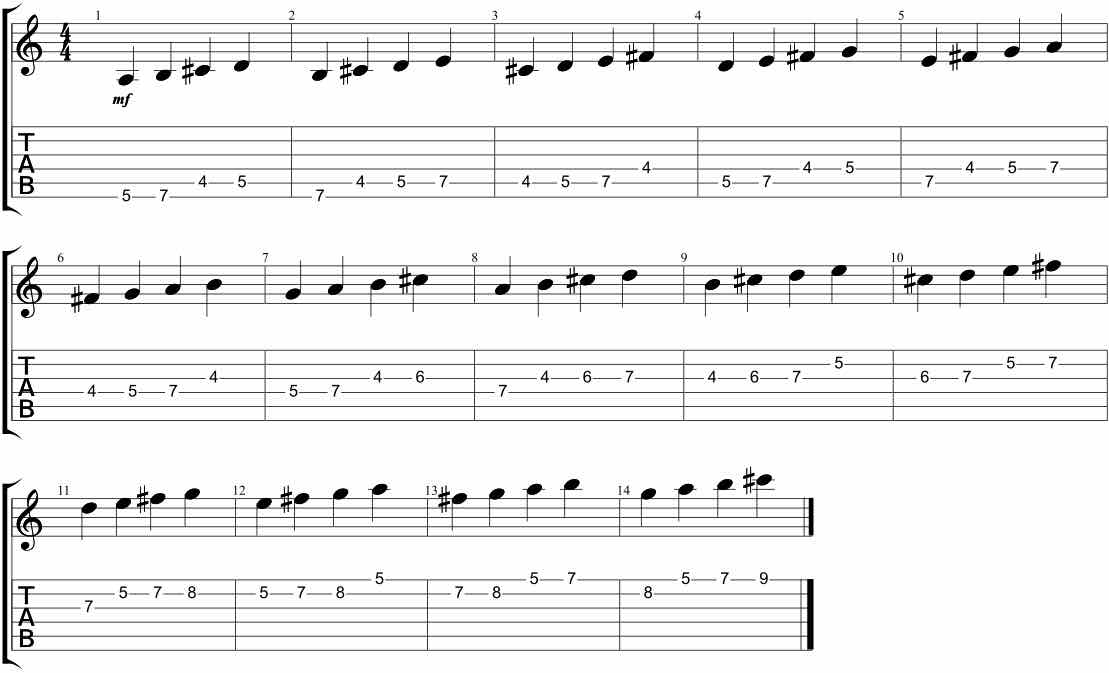 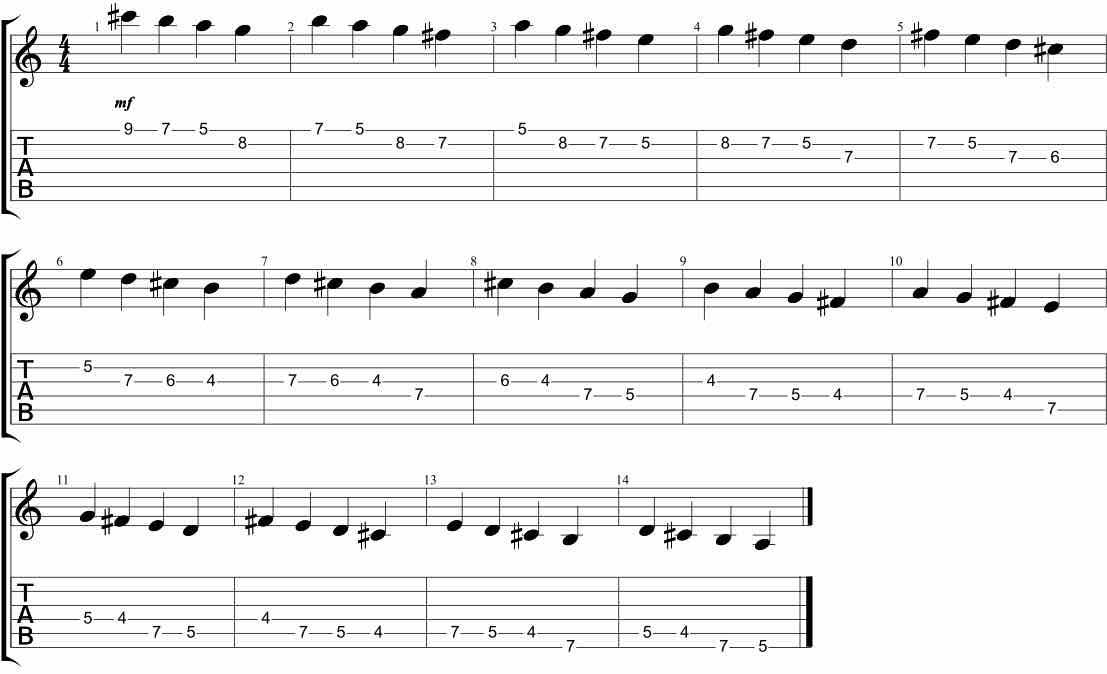 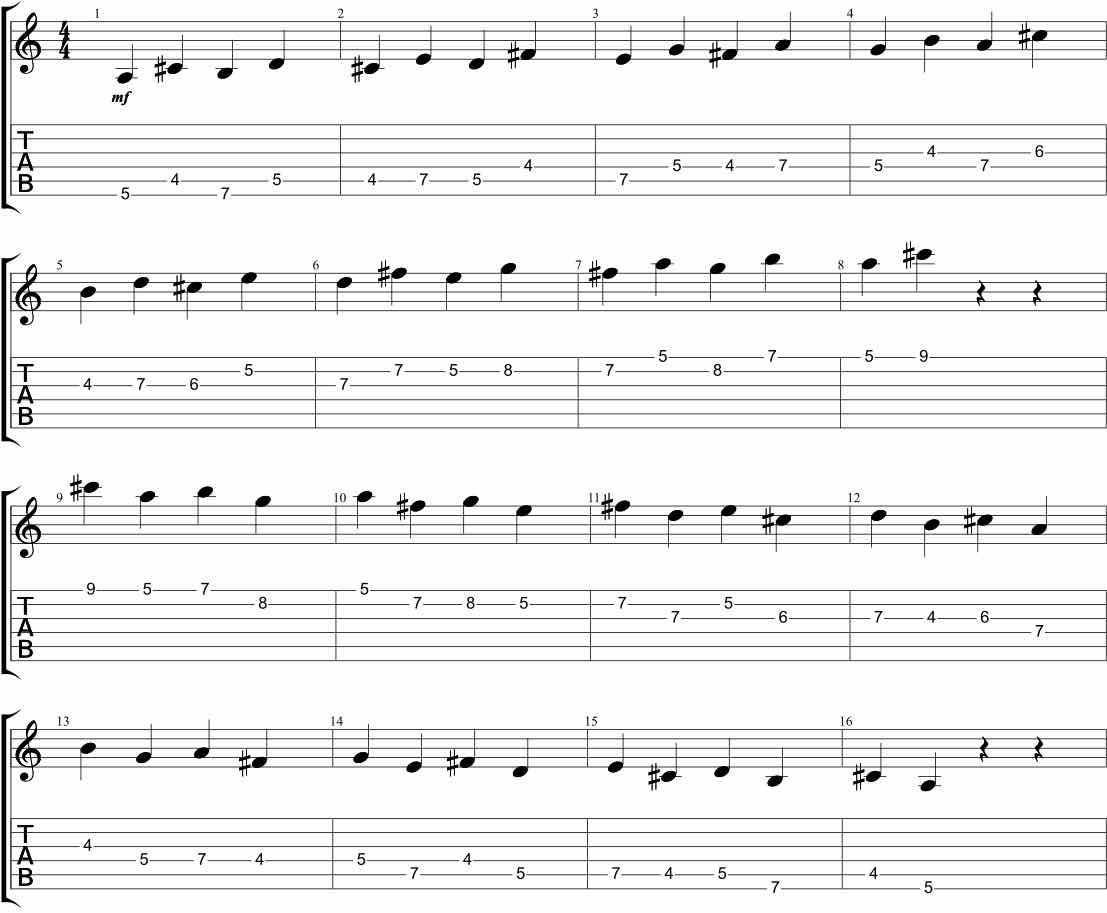 TIPS FOR LEARNING THE SCALE INSIDE OUT:

– Practice the mixolydian scale according to the finger position indicated on the note staff next to the notes.

– Practice the mixolydian scale with just your index finger.

– Start your scale on random strings, for example on the G-string and finish the scale all the way up the end of the scale.

– Start your scale on the D-string and play all the way up to the end of the scale. Practice this on every string.

– Now start from a random string and play all the way down the to beginning of the scale. Practice this starting on different strings.

– Move and practice the entire scale up a whole step (2 frets), you’re now playing the mixolydian scale in the key of B.

– Create a melody of 4 notes including the major 3rd and try to sneak it into your pentatonic improvisation.

– Play a short bit of mixolydian 3rds descending and finish it pentatonic wise.

– Start with pentatonic and slide into a mixolydian phrase ending on the major 6th.

– Make it a habit to add some mixolydian flavor to your pentatonic improvisation to develop and improve your skill until it feels comfortable and natural.

Join the Guitarhabits facebook page to keep up with the latest posts, guitar lesson videos, tips, tricks and other news about Guitarhabits.