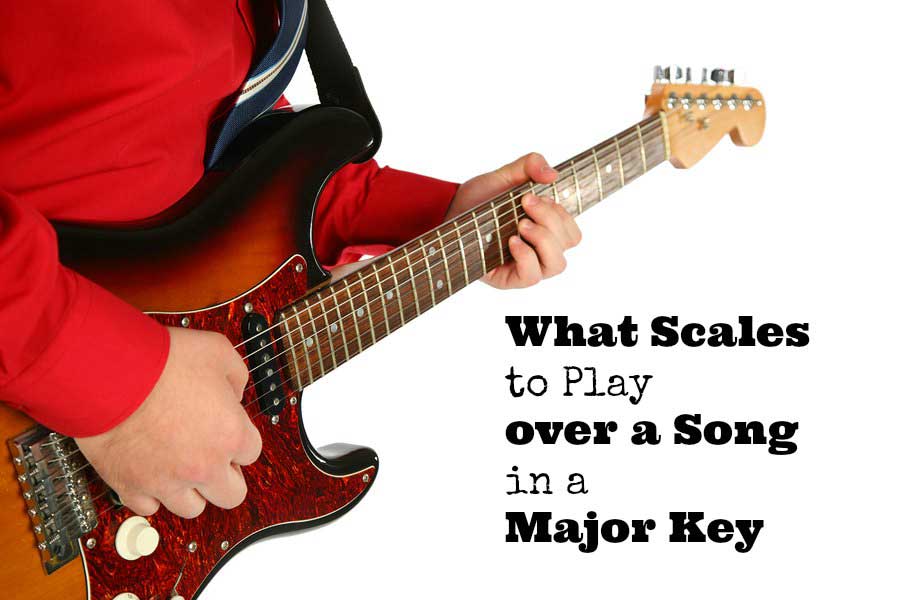 First, when a song is in a major key, it means it’s based on a major scale. The song usually conveys a bright, happy or cheerful mood. There are seven chords that you can derive from that major scale. We’ll look into that in a few seconds.

To be able to improvise over a major key you also need a major type scale. The two most commonly used scales are the major scale and the major pentatonic scale.

Here are some song examples with chords built from the major scale:
Runaway train – Soul Asylum
Like a Rolling Stone – Bob Dylan
Oh my sweet carolina – Ryan Adams
Let it be – The Beatles

THE SCALES
We use scales as a vehicle to improvise over these chords. Both of the scales below are in the key of C, so they fit perfectly over the C major chord progressions.

The Major Pentatonic scale is the easiest and most effective scale to play over a major key and delivers an uplifting blues country sound. The scale is widely used in pop, classic rock, blues, country and other styles of music. It consists of five notes: 1 2 3 5 6 (C D E G A) compared to the major scale: 1 2 3 4 5 6 7 (C D E F G A B). The red notes in the scale indicate the root notes. In this case all “C” notes.

If you want to dive deeper into the major pentatonic scales check out these posts:
– The 5 Major Pentatonic Scale Shapes Positions
– Combining minor and major penatonic scales

If you want to learn more on the major scale check out these posts:

Assignments:
– Memorise and learn each scale thoroughly.
– Put on a jam track in the key of C
– Try to create small melodies or melodic ideas with each of the scales.
– Listen and transcribe solos from songs in major keys to learn and study how to solo in a major key.
– Practice regularly to improve your soloing skills.
– Practice some major scale sequences to really get that major scale under your belt.

If you have any comments or questions related to this post, feel free to leave a comment. I appreciate it.
-Klaus Crow