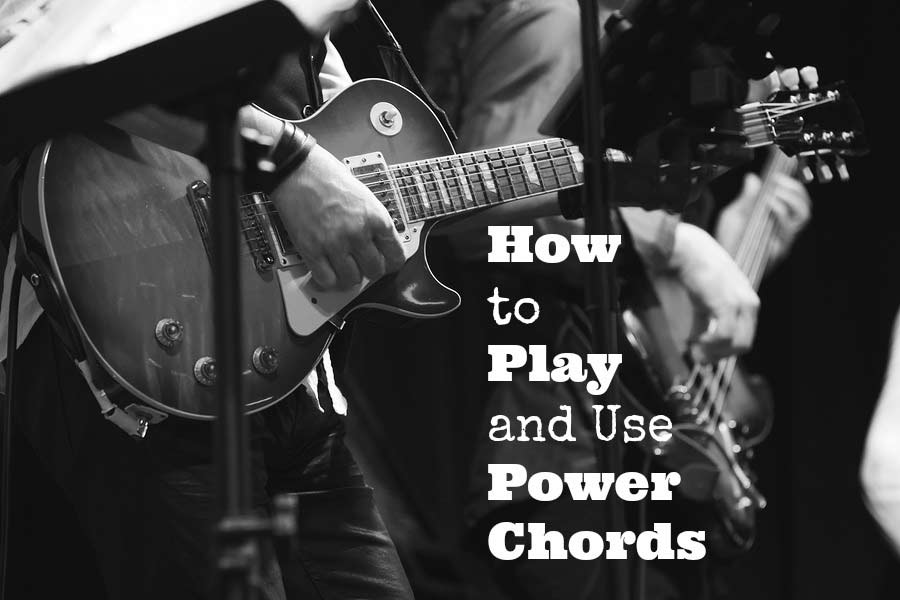 The primal feelings that derive from strumming power chords on a guitar that’s plugged into a great sounding amp or distortion, is what makes you wanna play the instrument over and over again. Add a drummer and bass player on top of that experience and superb feelings of euphoria will unfold.

Power chords are indeed powerful and that’s why they are mainly used in rock music, metal or any type of music that consists of electric guitars and distortion. However during the 90s a lot of rock bands started shifting the power chords to the acoustic guitars due to the MTV’s unplugged series, which set the stage for a new area on the acoustic guitar.

The power chord is a fairly easy chord to play, especially on an electric guitar or when played higher up the neck. It’s a moveable chord shape, that can be played in every key just by moving it up and down the fretboard (explained later).

This is why a lot of guitar players love to play rock music. The use of just one chord shape moving around the guitar neck throughout the entire song makes playing rhythm guitar quite accessible for the eager rock beginners.

Why power chords
When you play open chords in classic rock music, blues or country rock, the use of distortion or gain is added carefully with just the right amount of flavor to create a more fatter, bluesier or rougher sound.

But when you go into full distortion playing open chords the sound will shatter and become undefinable. Even a bad ass rock guitar player won’t feel comfortable with that kind of blurry noise.

Let’s take a look at the first chord on the left in the diagrams below. This is a G power chord, also known as G5. The Root note (number 1 in the dot) determines the name of the chord. Together with the 5th note of the major scale you get the name G5.

Make sure you mute (silence) the G, B and high E-string by placing the lower part of your index finger softly against these higher three strings.

The first chord on the left in the diagram below is a C power chord. It’s the same chord shape as above, only the entire chord is moved up one string, so now the root note is located on the 3rd fret, A-string which is a “C” note, hence the name C5.

The same thing here applies, you can move the chord up and down the fretboard. Every time the root note determines the name of the chord. The root note from the second chord is located on the 5th fret A-string (5th string), which is a “D” note, so it’s a D5. And the power chord on the right starting on the 7th fret is an E5.

You can also play a power chord barring the A and D string (5th and 4th string) with your ring finger or pinky (see below first chord on the left). You have to figure out what works best for you. I prefer playing the chord with all three fingers.

There are also guitar players who only play the first two notes of a power chord (see second and third chord from the left), which still makes it a power chord because it contains the root and 5th note. While this chord shape is easier to move around the fretboard, the power chord with three notes gives you a fuller and heavier sound.

As you read earlier the power chord doesn’t have the 3rd in the chord which doesn’t make it major nor minor. So you exchange the power chord for both major and minor chords. This way you can create a rock song out of every ordinary song.

Do you have any questions or power chord songs suggestions? Please share them in the comments below. I appreciate it!