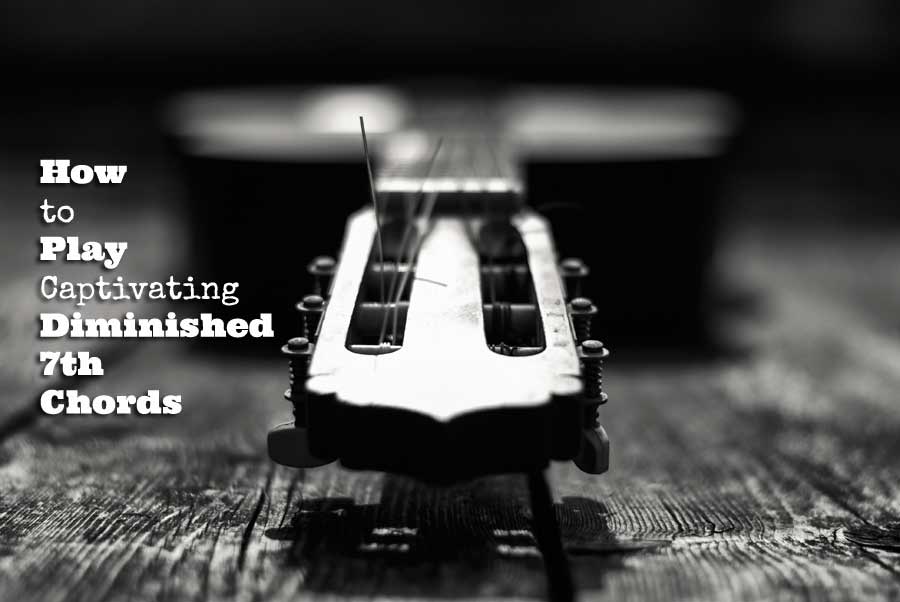 We start with a dim7 chord shape played on highest four strings. As you can see below from left to right, we move the diminished chord shape 3 frets up each time. Start the chord shape on the 1st fret, then move up to the 4th fret, the 7th fret and finally the 10th fret. Of course, you can move it up as far as you like.

You can see below that the 4 notes E♭, A, C and G♭ are present in all four chord shapes, only each time they are positioned on different strings. Any of the four notes in the chord can be the root note. So you can name all 4 diminished chord shapes to each of the four notes: Cdim7, E♭dim7, Adim7, and G♭dim7.

The next dim7 chord shape below is played on the middle 4 strings. Again, move the diminished chord shape 3 frets up each time, starting on the 2nd fret, the 5th fret, 8th fret and then on the 11th fret.

The last diminished 7th chord is starting on the low E-string. Bar the D and B string with your first finger.

How to Use Diminished 7th Chords in a Chord progression

It’s great to know how to play diminished 7th chords, but it’s even greater if you know how to apply it to a chord progression. Let’s take a closer look:

You can insert a diminished 7th chord between every of these whole steps.

Here are some chord progressions examples using the chord sequence above: