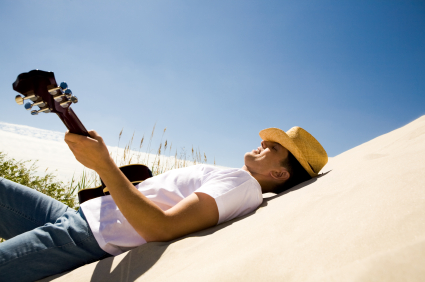 Wouldn’t it be nice by then, if you could just play something right on the spot instead of saying “I can’t do anything without having my sheet music in front of me”.

Another advantage is that you train your memory to remember music. The more often you try to remember lyrics and chords the easier it gets and the faster you’ll learn.
You also create freedom in your playing. You’re not stuck to a piece of paper and it will definitely make you a better guitar player.

Here are some suggestions:

-Use your senses
Use as much of the five traditional senses as possible: sight, hearing, touch, smell, taste. Your senses are very close attached to your memory. For example: you probably remember exactly from years ago where you were and what you did when you listened to your favorite songs.

-Visualize the song
Our brain thinks in pictures. So when we want to memorize lyrics we need to figure out what the song is about and visualize the story in our heads so we can relate to it. Visualize a story that really affects you so you get emotionally touched by it.

-Feel the song
When you sing lyrics, sing them with heart and soul. Try to feel what you are singing about instead of summing up just a bunch of words. When you feel the song, you are much more likely to remember it because you are using your senses.

-Connect the sentences
Search for the links and relationships between the sentences. What does one sentence say and what does the next one have to do with it.

-Associate the lyrics…
…with your own memories and past experiences. In other words: associate something new with something you already know. The brain likes to work that way.

-Small chunks
Break up a long text into chunks and memorize these one by one. Repeat the first chunk a few times before moving on to the next.

-Make it absurd
Make the visualization absurd. We tend to remember absurd things. Let’s take a sentence from the song “Hotel California” from the Eagles. For example: “Her mind is tiffany-twisted, she got the Mercedes Benz”. If you visualize an enormous brain (like really really big) twisting pop singer Tiffany (from the pop song: “I Think We’re Alone Now” in the late 80’s) while driving a Mercedes Benz, you probably won’t forget it. Maybe you think it’s a bad example… I suggest you create your own absurdness. The point is: if you read a sentence you can’t relate to at all, make it ridiculous.

-Keywords
Memorize key words that trigger other words. I always try to memorize the first word or two words in a verse or chorus. If I remember these, the rest will follow by itself. Or try to remember the most important word in the sentence to trigger the other words.

-Be alert
Make sure you are alert. Memorize the lyrics when you had enough sleep instead of when you are tired. Maybe it’s a good idea to do this in the morning opposed to learning it after a busy day at work.

-Be interested
Be interested in the story of the writer. What is the story about? Can you relate to it? Are there words in the lyrics you don’t understand? Look them up in a dictonary. Feel the story. Live it while you sing it.

-Repeat
One of the best ways to memorize lyrics is repeating them. Repeat the lyrics frequently during the day for at least a week or so if you want it to access your long-term memory.

-No distractions
Make sure you are not distracted. Lose all internal and external distractions:

-Use your waiting time
Memorize while you are waiting: while you’re in traffic, driving your car, waiting in a doctor’s office, while you are cooking, etcetera. You can use this precious time to work on your repertoire.

-Chords
When I started out playing guitar, I liked to see chords as shapes and objects. It’s a fast way of memorizing. Think of a D-chord as a triangle. Think of an A-chord as a little staircase going down, think of a Bm-chord as a staircase going up etc, etc. Sometimes I still do this with difficult chords. Because I’m used to think that way, I also remember difficult shapes more easily.

-Chords progressions
The same with chord-progressions. If it’s possible, try to see them as shapes and objects. For example when I play a chord progression like Am (577333), C major (x35553), G major (355433) and D major(x57775), I picture it like crossing the street diagonal from Am to C. Then I go up to G and then I cross the street again to D major. Try to see the logic behind the chord progression.

Don’t forget to write a comment. :-) I’d appreciate it.