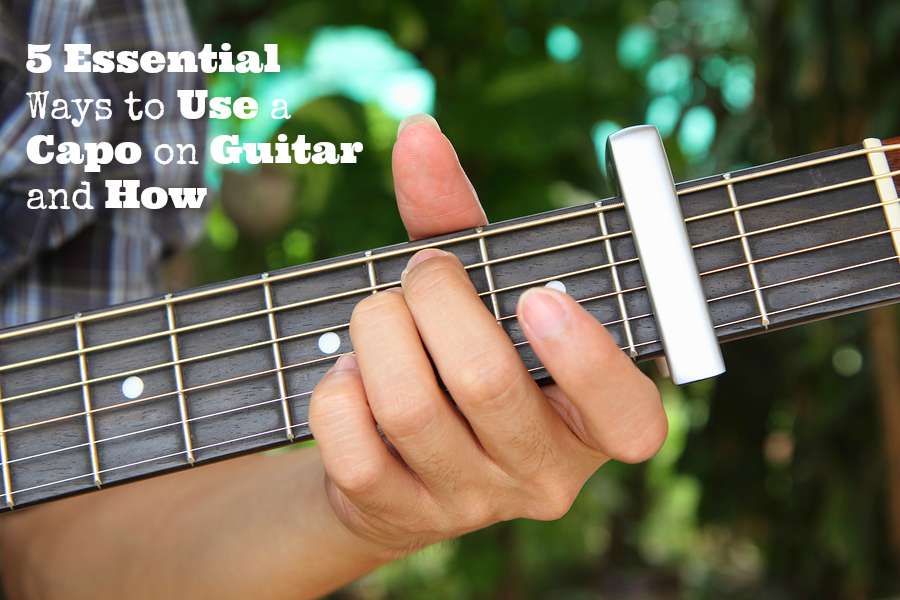 Once in a while you will bump into a great song. With excitement and anticipation you run to your guitar to learn the song, but then you discover the chords of the song are too hard and too difficult for you to play. Especially for the beginner guitar player this can be a thorn in the side.

Flat and sharp chords are often nasty chords that you would like to avoid in the beginning. But even intermediate and advanced guitar players like to chill now and then and skip those damn bar chords. Another reason they sometimes prefer open easy chords is because of the sound and the shape of the chords that is more suited for a particular arrangement.

The capo will really come in handy in a lot of situations. It’s a beautiful tool that will open a lot of doors and ways to get creative with guitar playing.

Here are the five most common and essential ways guitar players like to use a capo and how to do it:

1 – How to Make Your Chord Songs Easier Using a Capo

Now let’s say you find a song with the following chord progression:

This is not your most pleasant chord progression because it’s full of bar chords. So we’re going to use to capo to simplify the chords and make it easier to play.

Keep in mind: Each time you move your capo up a half-step (1 fret) on the fretboard you need to move a half step down the musical alphabet.

So if you would put your capo on the 1st fret you need to move each chord of the chord progression a half step down the musical alphabet (move from right to left on the image above), so G# becomes G, C# becomes C and D# becomes D.

So the chord progression now becomes G – C – D played with the capo on the 1st fret. These chords are much easier to play and are part of the 8 most basic and essential chords. Pitch-wise it sounds the same as you would play G# – C# – D# without a capo.

Let’s try another one:

Again you start with the capo on the 1st fret, move a half step down the musical alphabet, from right to left. The chord progression now becomes:

This is already a much easier chord progression. Now if you find the Bm chord still somewhat difficult to play just move your capo another fret up the neck to the 2nd fret.

Again, with the capo on the 2nd fret move a half step down the musical alphabet.

This chord progression is not really easy so continue to move your capo another fret up the neck to the 3rd fret. Move a half step down the musical alphabet.

This is a much easier song to play instead of D# – Cm – Fm – Bb without a capo and it sounds the same.

Assignment:
Find a song you like with difficult chords, grab your capo

and figure out the easy chords so you can enjoy it to the utmost.

2 – Change keys
While it’s possible that the chords of the original song are easy to play, it may not be right key for your voice. It could be the song is too high or too low for you to sing. With the capo you can change key and find the right pitch that matches your voice. If the song is too low put the capo on the 1st fret and sing along with the chords to see if it suits your voice better. If it doesn’t, just go up another fret until you find the right key.

You might think, I don’t sing so I don’t have to worry about that. That’s true, but you might be accompanying a vocalist some time in the future and he or she could ask you to play in a key that matches their voice.

3 – Creating beautiful sounds
Open chords often sounds more beautiful than bar chords. Also chord embellishments are much easier and tastier to apply using open chords. Playing open chords with the capo a few frets higher up the neck gives gives the sound a really nice sparkling touch. This is why a lot of singer songwriters love using capos. The capo gives them the freedom to sing in the appropriate key and still enjoy all the benefits of open chords. Watch these singer songwriters how they make beautiful music using a capo: Oh my sweet carolina by Ryan Adams, Colour me in by Damien Rice and check out this beautiful version of I am a rock by Simon and Garfunkel

5 – Make the song sound better
Sometimes the arrangement of the original song sounds great but when you start playing the chords of the song by yourself on the guitar it suddenly doesn’t sound that good anymore. It could be there isn’t a guitar in the original version and that’s why the chords don’t really fit when you translate it to the guitar. This is a good moment to use your capo and change the chords so they sound and feel better to your ears and match the song (while still playing in the same key). Like in step number one, just move your capo 1 fret higher up the neck each time and see which chord progression suits best.

Note: It’s great to simplify your chords for these kind of purposes, but don’t try to avoid practicing bar chords because they are challenging. Don’t forget you want to become a better guitar player!

Enjoy playing songs with a capo!