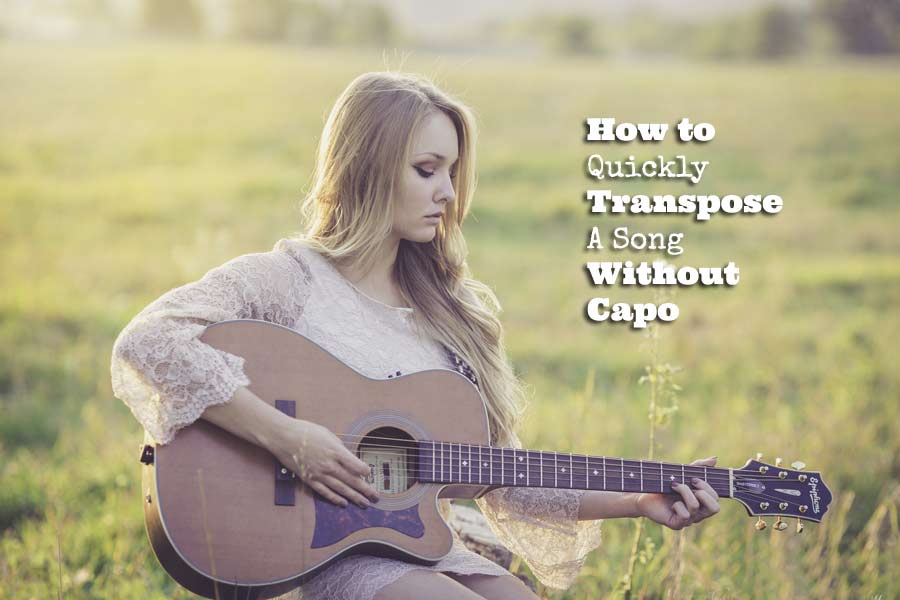 There are many ways to transpose a song in different keys. You can use a capo, play a song in bar chords and then move all the chords up or down, or write down all the chords of the song in the appropriate key.

Those are good solid ways, but sometimes it’s just nice to transpose without capo, bar chords or too much hassle of writing things down.

You want to switch between keys instantly using mainly open chords, because they sound nice and are easy to play. We’re not going for any sharp or flat keys in this post. We keep things simple.

So how do you go about that?

First, you want to know how to build chords of the major scale. If you don’t know how to do that, you can check out this post. If you don’t want to get into the theory behind it, no worries, you can also read on and just memorize the chord sequences that follow. You can always read more about it after this post.

We give each chord from the scale a roman numeral.

You can do this with every song.

Yes,the tricky part is that you have to memorize the 6 chords for each key to quickly switch between keys, but that’s just a bit of practice. You will find with the following tips that you will get it down rather quickly.

You’ve got 6 keys here: C,G,A,D,E and F. What you want to do is practice your easy favorite pop songs in these different keys.

Make it a habit each time you play a song to also play it in one or two other keys. In the beginning you have to think and memorize somewhat, but within a short period of time you’ve got the roman numerals in your pocket and you will be able to switch quickly from one key to another, and you will feel as a real winner.

You can do this game anytime and anywhere, while you’re waiting in traffic, in waiting rooms, in the shower, in bed before you fall asleep, you name it.

It’s really convenient to be able to switch quickly to a different key to make a song fit to your vocal range or somebody else’s, or to make the song sound nicer by choosing a key with easier or better sounding chords.

Check out the Building Chords and Progressions of The Major Scale for more examples and explanation.

Does this post help you or give any value? Let me know in the comments. I appreciate it.