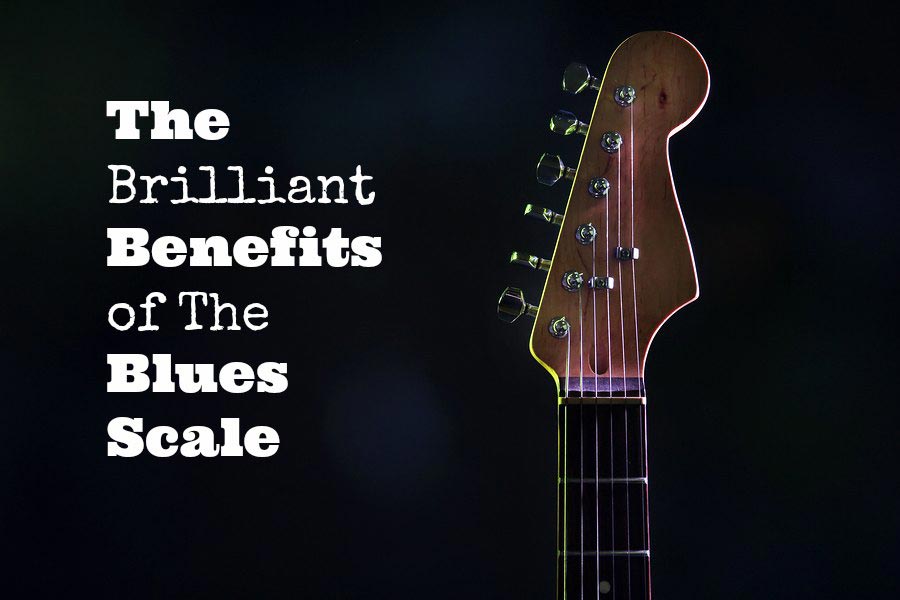 Although the blues scale doesn’t look that different from the pentatonic scale, the benefits are tremendous and can have a great impact on your soloing and creative expansion.

Let’s take a look at some of the reasons that make the blues scale such an important and valuable scale. We’ll show you how to play the pentatonic scale and the blues scale in different positions. And further we’ll explain how it can benefit, grow and open up your playing.

But not just blues and rock guitar players are font of the blues scale, also jazz and country guitar players use it frequently. The popularity of the scale is due to it’s sound, simplicity and effectiveness.

Easy, effective and efficient
The blues scale is one of the easiest scales in music but at the same time a very efficient scale that can be applied to many genres and styles of music. It’s an effective scale in the way that it really speaks to the hearts of your audience. The blues scale can sound bluesy, but also soulful, rocking’, brutal, angry, sweet, tender, frustrating, and deeply loving’. It can tear your heart out and lift you up in the sky!

Blues vs Pentatonic
The Blues scale has only one note more than the pentatonic scale, it’s got an added flat 5 (b5), which is called the “blue” note, but it just makes all the difference, especially when applied to different shapes. It vastly expands your soloing ideas.

Understand soloing
When you dive into blues scale shapes, blues licks and blues soloing, you will not only gain a good understanding of how blues solos work but also most pop, country and rock guitar solos. This is very helpful when you’re want to learn and transcribe guitar solos.

You think you know, but you don’t
Even guitar players who have played the blues for years still discover and find new blues licks and sounds from other players and musicians. The blues is an infinite source of inspiration and insights that keeps surprising you. If you stay receptive, new ideas will continue to show up.

The problem is often that guitar players stick with only one or two positions of the pentatonic scale for soloing, because the other scale shapes / positions don’t feel that comfortable to put in use. They don’t have that same amount of freedom and easy way of playing around with the notes.

Here’s where the blues scale comes in. The benefits of the “blue” note that is added to the blues scale opens up the bandwidth and gives you a whole new world of possibilities with every shape / position on the neck.

The combination of notes that make up the blues scale will give you greater flexibility within the scale and that will expand and spice up your soloing ideas. You’ll definitely get a lot more music out of your scales. Being able to play the blues scale in all shapes and keys, using the notes to their advantage, allows you to play freely, graciously and abundantly all over the neck.

Let’s take a closer look at the pentatonic scale and the blues scale.

A Blues Scale – Root on the E-string – Example 1
Now here’s the A blues scale. You’ll notice the extra “blue” (b5) note which appears twice throughout the scale. Just like the pentatonic scale you can play the blues scale in every key by moving it up or down the neck. The red notes indicate the root notes. The blue colored notes indicate the “blue” note.

Again, you can play this scale shape in every key. For example: Move the entire scale up 7 half steps (7 frets), starting your first note of the scale on the 12th fret A-string, which is an “A” note. Now you are playing an A blues scale again, only higher up the neck.

Have fun and keep practicing!

If you really want to dive into the blues scale, and learn how to play and create real melody with all the scale shapes, incorporate cool blues licks and use it to upgrade your soloing and improvisation skills, then check out the
50 Cool Blues Licks Improvisation Course.