As a guitar student you want to learn your scales inside out, not just to expand your music theory or to develop dexterity, but to learn to solo and improvise.

In order to solo and improvise you need to know the words of the language. You need to know how to use those words in a fluent manner with confidence and ease to express your musical emotions.

This is where the scale comes in. The scale contains the letters and the words to tell your story.

In this lesson I will give you the exercises to really dig into the scale and memorize it from top to bottom, backwards and forwards so you can start your journey to learn to solo and improvise.

We will use the G major scale as an example, but you can apply this to any scale.

There’s a lot of exercises and examples here so take your time with it. Start with one exercise and practice it until you can play it at a comfortable level, then move on to the next. Before you know it your fingers are running the show.

END_OF_DOCUMENT_TOKEN_TO_BE_REPLACED

In becoming an adept guitar player it is important to master the fretboard, learn all the notes on the guitar, and be able to move freely around the neck and play all your scales, riffs, licks, chops and solos in every key.

You can cultivate this by using and practicing your musical ideas through the cycle of fourths. For in depth explanation of the cycle of fourths check out How to Benefit from The Circle of Fifths and Fourths. In this post we are going into the practical side of things.

Below an example of how to move the lick through the cycle of fourths from A to D to G. You try to figure out the other keys. If you want to learn this lick in a videolesson check out Cool Acoustic Electric Blues Guitar Lick

Now you’ve passed through every key via the cycle of fourths. Practice this with your chords, triads, licks, arpeggios, scales, etc and you’ll discover it’s purpose and benefits. You will feel it’s different, akward and challenging to play the same lick, scale or exercise in other keys. You have to relearn that lick or scale a bit in various positions, because you have moved it up or down the neck.

END_OF_DOCUMENT_TOKEN_TO_BE_REPLACED

The major scale is often called the MOTHER OF ALL SCALES, because all other scales, modes, intervals, chords and harmony in western music can be derived from it. It’s your main reference for all things making music.

If you want to makes sense of what you are actually playing and learn to understand, analyze, create, and be able to play any chord, progression, solo, song or anything else that involves your guitar playing you need to know the major scale. It’s equally valuable for the rhythm guitar player and lead guitar player.

The major scale is also a perfect warming up and dexterity exercise to start your guitar practice with. Two for the price of one.

MAJOR SCALE SOUND
We all know the famous “Do, re, mi, fa, so, la, ti, do” melody you learned in preschool. This is the actually the major scale we are talking about here. And it’s important that you know what it sounds like, recognize it, and know how to sing it along.

MAJOR SCALE CONSTRUCTION
The major scale contains 7 notes starting with the root note (1) and the scale is followed by the octave of the root note: 1(root) 2 3 4 5 6 7 + 8 (8 is the octave and is the same note as the root, only an octave higher, so 8 equals 1). Every other western scale, chord or progression formula is compared to and can be derived from the numbering system of the major scale: 1 2 3 4 5 6 7

WHOLE HALF NOTE SCALE FORMULA
To form a major scale on a single string we use the Whole-Half step formula: “W-W-H-W-W-W-H”, where “W” = Whole step (2 frets) and “H” = Half step (1 fret). So going one fret up the neck is a half step, and going up two frets equals a whole step. You can construct a major scale on any note, and on any string using this formula.

OPEN G MAJOR SCALE
An open major scale means you are playing a major scale that also uses open strings. It’s the perfect scale for beginners, but also the intermediate player has to have this one memorized. See TABS below.

END_OF_DOCUMENT_TOKEN_TO_BE_REPLACED 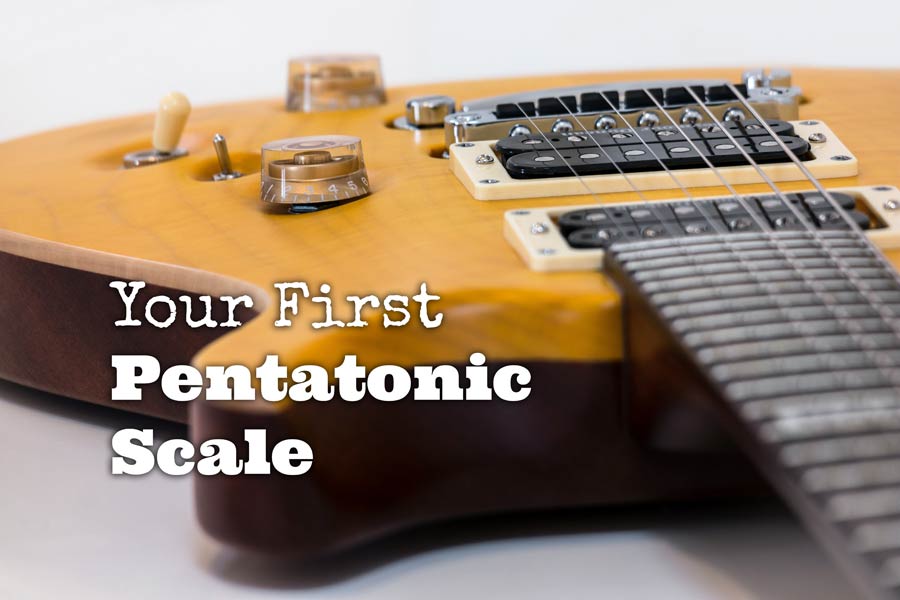 This tutorial has been conceived for beginner guitar players who want to go beyond strumming chords and start playing scales all along the fretboard.

Learning how to play scales is a great way to expand your musicality and exercise your fingers agility; one of the easiest scales to learn at the beginning of your lead guitar adventures is definitely the scale pentatonic.

What is a Pentatonic Scale
In the word “pentatonic”, “penta” means “five”, in fact a pentatonic scale is composed of 5 notes (in this tutorial we’re not going to investigate the historical origin of this scale, you can find an interesting article on that here)