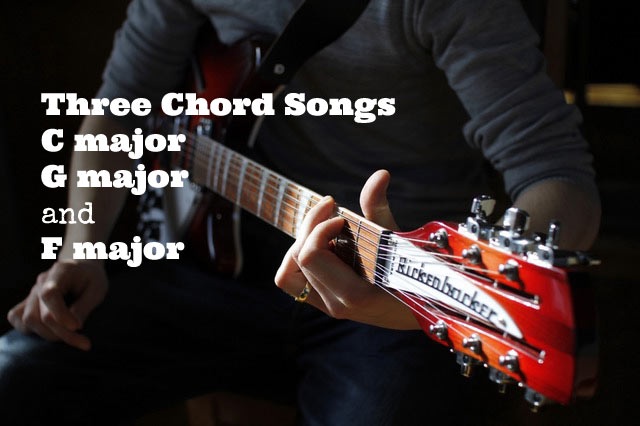 This song was not written by the Beatles, but they are certainly the band who made it popular. This was the last song recorded on their album Please Please Me because their producer George Martin knew John Lennon’s voice would take a beating. He definitely gave it is all while singing this song!

KEEP YOUR HANDS TO YOURSELF

The Georgia Satellites had a hit with this southern rock song back in the mid-80’s. In this case we have transposed it back to C from the Key of D. It is a hard rockin’ and fun song to play especially through a good amp with some distortion!

This song was written by June Carter Cash about falling in love with her soon to be husband Johnny Cash at the time. It has been covered many times and is a perfect beginner song. Often times it is played in the Key of G, but here we have transposed it to C.

Cecilia is a song off of Simon and Garfunkel’s album Bridge Over Troubled Water. The rhythmic part of the song was actually recorded at a late night party by banging on a piano bench! While playing it on the guitar I try to get a little rhythmic strumming going while slightly using the guitar body as a drum. After playing it a few times you will get the feel and see what I mean.

This song is a traditional folk song from the Bahamas, released by the Beach Boys in 1966. Now of course the Beach Boys took this simple folk song and added more to it with harmonies and some minor chords, but at its core it is a great beginner three chord tune for the guitar.

DOWN ON THE CORNER

Creedence Clearwater Revival originally played this song on live tv with a washboard, gut bass, kazoo, and a cheap Kalamazoo guitar. All to emulate a simple street corner band they called Willy and the Poor Boys (granted they likely were not really playing some of the instruments but it sure looked good!). When you play this song you don’t need a fancy guitar, just 3 chords and some rhythm!

ALL THE SMALL THINGS

With this song we move a little closer to modern times. Blink-182 recorded this simple and catchy ditty inspired by the Ramones. Like the rest of the songs all it requires is three chords and some energy. Even with an acoustic guitar you can put some punk into it!

This song was written by George Jackson and made popular by Bob Seger. This is a staple of classic rock radio and a tune guaranteed to be played at a bowling alley at least once a day! This is another tune that uses G7, and while you can use a regular G chord, challenge yourself and use that G7. Sevenths are the backbone of Rock N Roll chords so it definitely needs to be played in this song.

Do you know this song only recently became available in the public domain? That is why we rarely heard it sung in movies and on TV because anytime it was used royalties needed to be paid! Seriously! It may seem like a silly song to include on this list of three chord songs, but this is a song that you want to know. It is very easy and if you play your guitar enough for an audience, eventually this WILL be requested!

Gianca is a guitar teacher and a software engineer from Italy. He is the founder of FaChords, a guitar tuition site where you can find free books, interactive learning software, guitar lessons and tutorials.