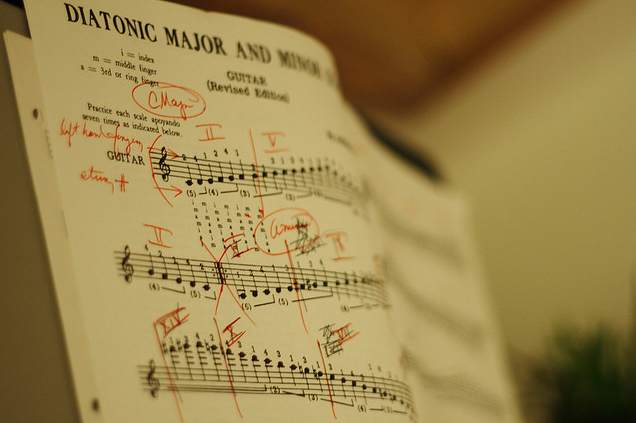 The first scale I learned as a teenager was the minor pentatonic scale. That was a good starting point for me cause I was really into rock music and metal.

I only learned the first and classic position that most guitar players know, but l did learn it thoroughly though.

I also figured some blues boxes like the “Albert King box” and the “B.B King box”. (they are not official names).

They are just little pieces of postion 2 and 3 of the blues scale. I learned how to connect the minor pentatonic scale and some of these blues boxes together and tried to improvise over these scales in every possible way I could. (by creating licks, applying sequences, learning solos to gain input, building a vocabulary to understand soloing and improvisation, etc.)

Much later on I learned to use the other 4 postions of the pentatonic / blues scale. Then I moved onto the major scale and it’s modes, harmonic minor, melodic minor etc. But not all those scales are important or necessary for every guitar player.

So the big question is: What is the most important scale for you to learn?

Well that all depends on which style you are playing.

If I would really have to name the two most important in general I would say:

You can use the pentatonic scale for just about every style you can think of and the major diatonic scale is the building block from where it all happens. All your scales, chords and chord progressions are derived from the major scale. It’s where you will build your knowledge of theory, which will also improve your improvising skills.

As I just said, your most important scale is depending on what style you are playing.
So let’s take a look at what scales are appropriate for different styles of music.

The more you learn about scales the more fascinating guitar playing becomes, but take it slowly and take it step by step and learn each scale thoroughly before moving onto the next one.

Learn as much about a particular scale as you can.

Just because you know umpteen billion scales, it doesn’t mean you have to use them all in a solo. ~ Kirk Hammett

Spread the knowledge by sharing this post on Stumbleupon.