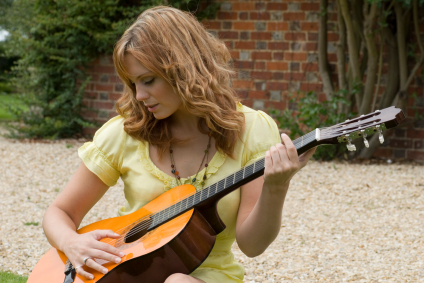 So, you’re not always in for a good half an hour of sweat and tears?
Well today I have some key-motivators for you in this post.

But first this…
You are now playing’ guitar for a while and sometimes you feel like you’re in a rut.
You’re stuck with the same obstacles and you’re wondering if you’ll ever get better.

You already get tired when you think about those hard chord changes or that terrifying lick.

Now ask yourself why you wanted to play guitar in the first place. What were you thinking at that point? What was your goal?
Or were you just thinking…Well I’ll pick up this guitar, take some lessons, maybe practice the first 3 weeks while I’m still enthusiastic about that
“not that big of an issue” part of guitar playing and then after a year or so everything will work out for itself.

Well I have to admit that is a nice thought, but you know better than that. You still have to keep practicing to get going.
And of course we all have our ups and downs, but once in a while we have to give ourselves a nice kick in the but.
It’s all about prioritizing, reserving that half an hour, and not feeling guilty about spending that short amount of time for yourself to grow.
Seek the pleasure and satisfaction in the wonderful world of practicing.

– Who are what inspires you to play guitar? Do you have a role model, a really great guitar player or songwriter that gives you the urge to pick up that cool guitar.
Doesn’t it make you wanna learn that incredible song. What song turns you on. What better time is now to set yourself a new goal.
Amaze yourself and the people around you and start practicing today.

Practicing is rewarding Practicing is hard work. it can be fun, frustrating, but also exhilarating.
If you work really hard at a cool piece of music and after a few hours, days or weeks you pull it off, then there is almost nothing that can beat that feeling.
The best reward ever!

Take the first step What ever you do, when you think about practicing before you intend to, DON’T !
If you are already not really in the mood your mind is probably magnifying the whole process of hard work, pain and difficulties.
You already made up a 100 excuses why you cannot or should not practice today before you can even think of them.
Our brain is really good at that. Quit it! Cut it out!
Think about the goal, the reward, the coolness, Just take the first step. Take the guitar from the stand. Sit down on a chair or your comfy couch and just start strumming’ those strings and
then after a few minutes pick up that song that will make the difference.

Write it down on your calender when you are going to practice and for how long.
Let’s say 15 minutes in the morning and 15 minutes in the afternoon. Or a good work out at 19.30 till 20.00 hours in the evening. Maybe you’re a morning person and get it done before you’re off to work.
Worrying about the neighbors? 15 minutes on an unamplified electric guitar and the evening you’ll play another 15 minutes on your acoustic. Figure something out!

Create your own private little practice environment somewhere in the house. Set up the tools you need, so you are ready to go whenever you are inspired or whenever you have a few minutes to take it to the next level or when you just wanna feel your strings and play a tune.

Make your guitar visible. Your guitar should be in a place where it constantly invites you and urges you to play. ( Not in a bag or case somewhere hidden in the closet. You know who you are! )
Make sure you bump into it every time.

Make your guitar look good. Clean and polish your guitar once in a while. Take care of it. What about some fresh new strings? They will sound good, look good and feel good on your fingers.
Or maybe you like your guitar dirty and beaten up. I personally prefer that, but still….new strings does the trick.

Make it a daily habit., so you’re getting into the flow. It’s like reading a book. If you read a few pages and 3 days later you’ll read another few it’s harder to get into the flow of the book.
Daily practice makes great progress. When you’re in the flow you will see, you’ll get more motivated everyday. Things becomes easier and clearer. The logic of chord changes, licks, riffs, the position
of your fingers make more sense and you feel something is about to change in your playing.

Don’t get stuck. When you practice on one particular thing for too long and it doesn’t go anywhere, let it go for a while. Don’t get stuck in the moment. Don’t let it get you down.
Practice something else and come back to it later. You’ll notice it gets better every time. It does!

Small steps I always advice people to practice a half an hour a day if that is possible, but it’s certainly not a must. It’s just a good starting point.
You can also practice 15 minutes a day if that goal is more realistic to you.
Begin practicing 5 minutes a day for the next 2 weeks and just slowly build it up from there.
With smaller steps you are more likely to keep it up.
Don’t tell yourself to practice everyday for an hour when you’re just starting out, you won’t keep up. Small steps and gradually build it up.

Get out of a slump! You practiced for 2 weeks in a row really good and now you are already back in a slump. You let yourself down.
Don’t worry about it. Just pick it up where you left off. You are just human. Forgive yourself. Don’t tell yourself “see I can’t do it” That’s bull! Of course you can! ( obama-style )
Just get on track. Take the first step. Pick up your guitar and start playing a few minutes. Feel the awesomeness and reward yourself for doing so.