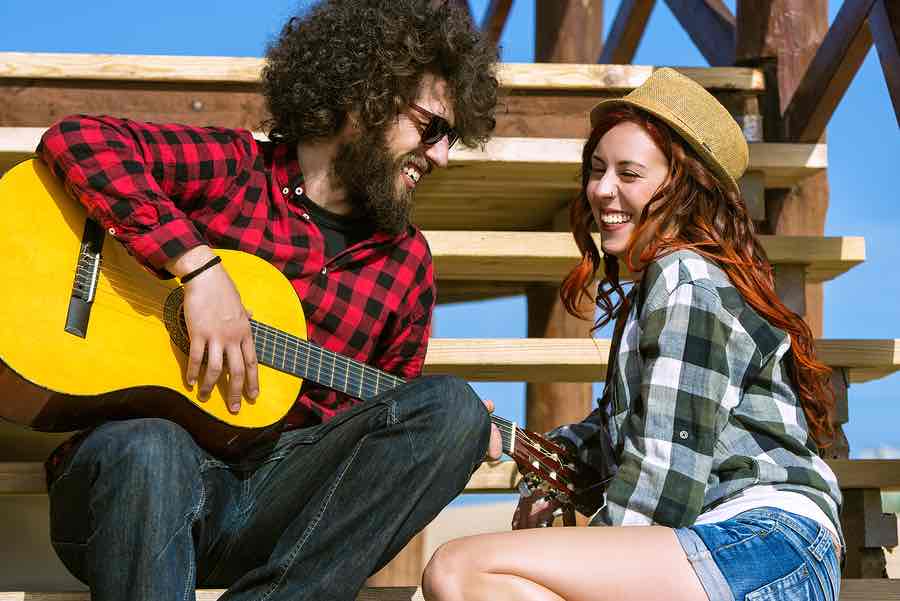 Today is all about guitar jokes. We’re turning the tables and make fun of ourselves… The guitar players.

Sit back, relax and have a laugh.

If you don’t like jokes you can always check out the Guitarhabits’ guitar lessons archive for a great workout and some awesome guitar knowledge to get your fingers moving.

If you do like jokes, read on and check out the archive later on.

Below in the post there are also some really great “Shreds”, where footage is taken from a guitar player’s performance and replaced with new audio in sync with lip and guitar movements to create some brilliantly funny videos.

There are 20 guitar jokes here. Remember they are just jokes, don’t take them personally or seriously.

Enjoy and have fun!

The Jokes:
1 – Two jazz guitarists meet in a bar, and one says, “Yeah man, I bought your last album, it was awesome!” to which the other replies, “Oh so that was you!”.

3 – What’s the difference between a Fender and a Gretsch?
The Gretsch burns longer.

4 – The fact that there’s a Highway To Hell but only a Stairway To Heaven says a lot about anticipated traffic numbers.

5 – What’s the difference between a lead guitarist and a terrorist?
You can negotiate with a terrorist.

6 – What do you call a guitarist who breaks up with his girlfriend?
Homeless

7 – What’s the difference between a lawnmower and an Electric Guitar?
You can tune a lawnmower.

8 – How do you figure out who the guitar player is at a party?
He’ll tell you.

9 – Two guys were walking down the street. One was destitute. The other was a guitar player, too.

11 – Why are so many guitar player jokes one liners?
So the rest of the band can understand them.

12 – How does a guitar player protect his Guitar from being stolen?
Store it in a bass case

13 – What’s the range of a Gibson Les Paul?
Depends on how far you throw it.

14 – Why do guitarists prefer playing guitar to cycling?
Because with a bike you only get two pedals.

15 – How can you tell when your guitarist is out of tune?
His hand starts moving.

17 – Why bury guitar players 6 feet under?
Because deep down, they’re all very nice people.

18 – How do you get two guitar players to play in perfect unison?
Shoot One.

19 – How do you know someone’s a really good guitarist?
He’ll tell you!

20 – Why do lead guitarists walk around the stage when they play?
To get away from the sound.

The Shreds
Here are five of the best guitar player and band shred videos.
For those who are not familiar with “Shreds”, check them out they are hilarious.

Do you know any great guitar jokes? Please share them in the comments. I appreciate it.