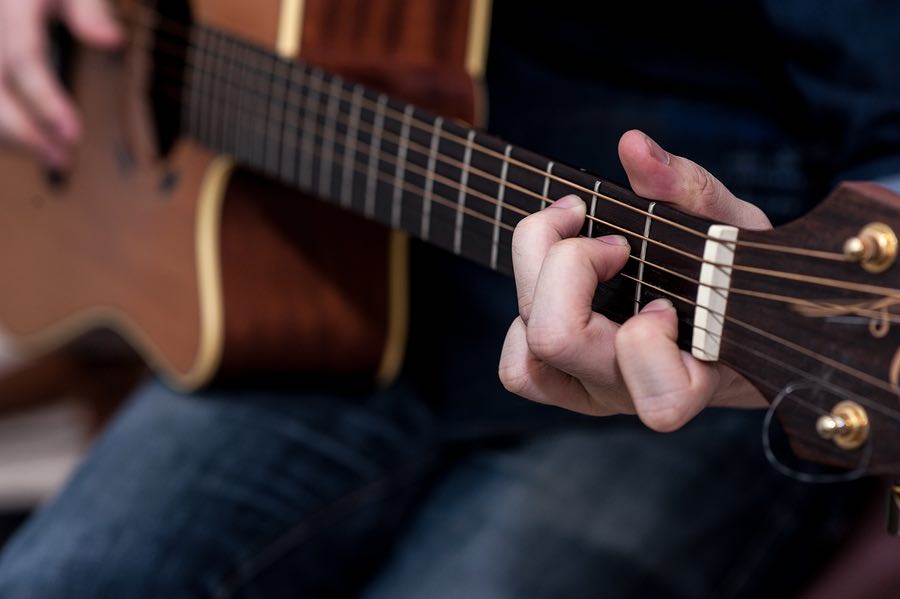 For most beginner guitar players the first goal is to play an easy song. To do this you need a couple of things:

A guitar, some chords, a strumming pattern and a smooth chord transition. The latter is the tricky part.

Changing chords while maintaining a steady rhythm pattern is the biggest challenge on the path of the beginner.

It’s often a struggle and hard work to make the chord transition sound any good. It almost feels like it’s something that can not be done, but nothing could be further from the truth.

A smooth transition of changing chords is something that does take time and effort, but with the right tips and tricks you will get there a lot faster and make it work as it should.

Time to get this baby up and running!

1 – Work on chords first
Before you start changing chords, first focus on perfecting your chords and chord movement.

It’s stated by many accomplished guitar players that visualization is one of the keys to major guitar improvement.

3 – Relax
Make sure you relax your fingers the very moment you move to the next chord. Also relax your neck and shoulders (don’t raise your shoulders). Avoid or release any tension in the arms, wrists, hands and fingers.

4 – Be lazy
Try to keep your fingers movement at a minimum. Keep your fingers as close to the strings as possible when you’re changing chords. The less you have to move your fingers, the faster you can make the switch.

5 – Go slowly
Practice each chord change slowly. Don’t rush. You must be able to observe your fingers and see where you are going and how you are moving to the next chord. Learn from what you see.

6 – Make use of pivot fingers
When you want to switch between two chords there is often one finger that both chords have in common. This finger can be left on the same string and fret. It doesn’t need to leave the string when you’re moving to the next chord. This is what we call the pivot finger. It will give you support while you move your other fingers around it and into the right position of the next chord.

If you go from “C” to “Am” you can see there are two fingers that won’t have to leave the strings. You only have to move one finger.

7 – Train your muscle memory.
This is a great exercise. Play a chord and strum it once. Lift your fingers off the strings while keeping the shape of the chord. Now place your fingers back on the strings and strum it again. Take them off again… and put them back on. Practice this for two minutes. Try it with a different chord.

Play a C chord and add the strumming pattern above. Now on the last up-stroke of your strumming pattern (see the last underlined “up”) only lift the fingers that you need to move for the next chord off the strings. Here’s where make the chord transition. Try not to overemphasize this last up-stroke so you can make a smooth transition to the next chord.

Make sure your fingers are back on the strings on the first down-stroke of your next chord. Now repeat the strumming patten on the Am chord. Again lift your fingers on the last up-stroke when you make the switch to the next chord.

Keep your strumming pattern at a steady but slow tempo all the way through.

Once you feel comfortable playing this chord transition try a more challenging one, like “C” to “Em” or “D” to “G”. The same principles applies to all chord changes. Practice switching chords for a few minutes and multiple times a day.

You can also try a more complicated strumming pattern when you’re up for it. Start slow at all times. Do not rush, You want to keep observing your fingers while you’re making the switch from one chord to another so you can learn from it and improve where possible.

9 – Keep the rhythm going
The moment you want to switch chords during your strumming pattern your right hand probably stops, because your left hand can’t keep up yet and needs time to make the switch. This is something you have to practice.

You have to keep your strumming pattern at a slow and steady pace and force your fingers of the other hand to make the switch to the next chord while you keep the rhythm going at steady pace. Don’t stop the strumming. You have to train yourself to do both actions (strumming and switching) simultaneously.

Again play slow so you have time to think about what you’re doing. If you’re going to fast you can’t make it work. Speed comes later.

10 – Practice daily
Repetition is the key to improvement. Practice daily and with focus. Be patient, it takes some time to get this under your fingers but you will get there definitely. Just keep at it. It will be the best thing ever.

If you want to learn more chords check out: YourGuitarChords.com

Do you have more tips? Please share them in the comments.