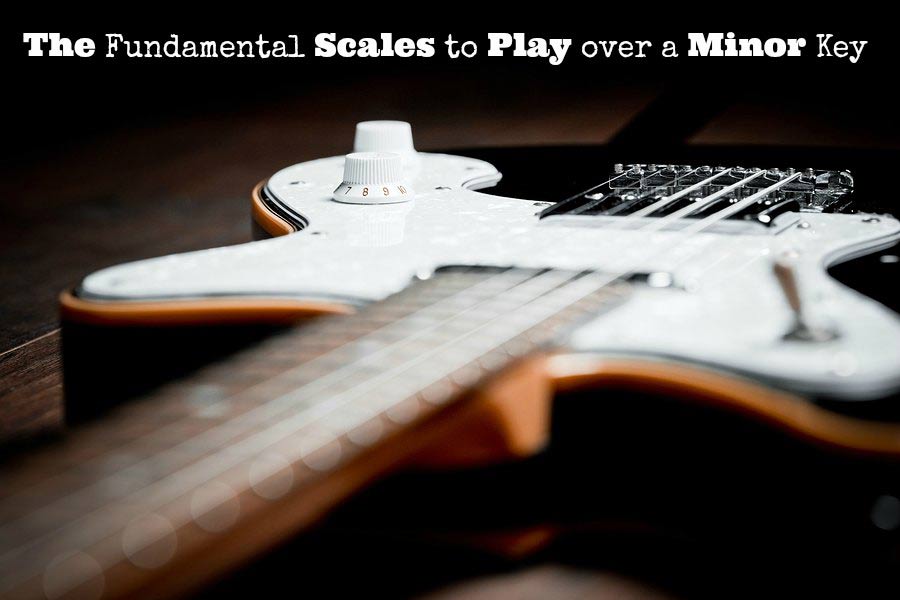 According to scientific american it seems that over the last few decades popular music has changed it’s course from major to minor keys.

A minor key means the song is in a key or mode based on a minor scale. The song usually has a more darker, melancholic or sad mood.

The two most used and fundamental scales are the natural minor scale and the minor pentatonic scale.

You can use these chords to build any progression. A popular and common chord progression is Am G F G (i – VII – VI – VII)

Here can you learn more on how to build chords and progressions of the minor scale.

THE SCALES
We use scales as a vehicle to improvise over these chords. Both of the scales below are in the key of A, so they fit perfectly over the Am chord progressions.

The Pentatonic scale is the easiest and most effective scale to play over a minor key and is capable of beautiful bluesy, dark and soulful sounds. The scale is widely used in pop, rock, blues and other styles of music. It consists of five notes: 1 b3 4 5 b7 compared to the major scale (1 2 3 4 5 6 7).

The scales are mostly used in jazz music, but they can certainly be applied to various styles of pop and rock music as well. Note that the chords used for playing these scales over slightly change as you can learn in the posts below. Dig in:
– Dorian scale: How to Play and Apply The Dorian Scale
– Harmonic minor scale: The Awesome Harmonic Minor Scale
– Melodic minor scale: The Melodic Minor Scale